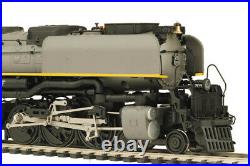 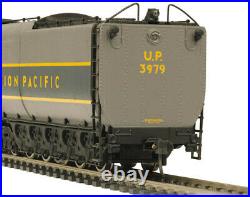 This is MTH 80-3201-1 4-6-6-4 w/Snd UP #3979. 4-6-6-4 Challenger (oil burner) steam engine with Proto-Sound 3.0, Union Pacific (two-tone gray with yellow stripes). The first Challengers were conceived in 1936 to replace the Union Pacific’s fleet of three-cylinder 4-12-2s (shown elsewhere in this catalog). But a decade l… This item has been graded per TCA standards C-8: Like New. Overall condition is Like New. MTH 80-3201-1 HO Scale Union Pacific 4-6-6-4 Steam Loco & Tender w/Snd #3979 LN. But a decade later they were considered slow and difficult to maintain. So American Locomotive Works (ALCO) was commissioned to build what became one of the most successful fleets of articulated engines on any railroad. Forty Challengers were built in the 1930s. The pressure of wartime traffic brought an order for 65 more of these 70 mph greyhounds in 1942-44, with improvements based on lessons learned from the UP’s 4-8-8-4 Big Boys. In service, the Challengers often complemented the Big Boys, speeding traffic over less rugged territory and handing it over to the Big Boys for the passage over Utah’s Wasatch Mountains. The Challengers were steam power at its zenith. They incorporated all the technology that represented super-power steam, including roller bearings on all axles and drive rods – but none of the foolishness that characterized some of the desperate efforts to save steam in the post-war years. It was in a roundabout way that six Challengers ordered by the UP ended up hauling coal for the Clinchfield Railroad. In the midst of World War II, the War Production Board refused the Rio Grande’s request to order new articulateds of its own design and instead diverted the last six Challengers in UP’s order to the D&RGW – which turned up its nose at the locos and decided to lease them for the duration and return them after the war. Thus six engines intended to speed over western deserts and mountains ended up thundering through Appalachia. While ours is not the first HO model of this massive prototype, we believe it is certainly the best, equipped with authentic articulated sounds, including the front and rear engines going in and out of sync; actual UP whistle sounds, which can be quilled, just as a real engineer plays the whistle control; die-cast construction and optional traction tires for. Please note, after seven days our systems may automatically re-list unpaid items. Explain why the item does not meet your expectations and how you would like us to handle the issue. If your item has been damaged try to include a photograph of the actual damages. Well do our absolute best to make you happy. Make sure to include your contact and order information when you return your items. O Scale 2 Rail. The item “MTH 80-3201-1 HO Scale Union Pacific 4-6-6-4 Steam Loco & Tender withSnd #3979 LN” is in sale since Monday, August 24, 2020. This item is in the category “Toys & Hobbies\Model Railroads & Trains\HO Scale\Locomotives”. The seller is “trainz” and is located in Buford, Georgia. This item can be shipped to United States, all countries in Europe, all countries in continental Asia, Canada, Mexico, Australia, South africa, Bahamas, New Zealand, Chile, Colombia, Costa rica, Panama, Trinidad and tobago, Guatemala, Honduras, Jamaica, Antigua and barbuda, Aruba, Belize, Dominica, Grenada, Saint kitts and nevis, Saint lucia, Montserrat, Turks and caicos islands, Barbados, Bermuda, Bolivia, Egypt, French guiana, Guadeloupe, Martinique, Nicaragua, Paraguay, Reunion, Uruguay.